please check our gasket compatibility to aid your material selection process
for highly corrosive environments – Alloy 22 clamps are available from stock
we have extended our range of SSH heavy duty clamps from 1/2″ thru 12 5/8″
ACL produce our own range of Mesh gaskets in the UK – to suit BS4825 & DIN32676
You are here: Home / ACL® SH Safety Clamp 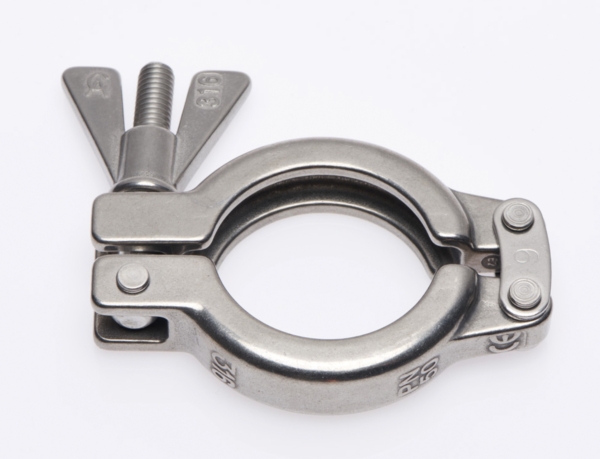 The new SH Safety Clamp is based on the design of the widely accepted 316 stainless steel SH clamp, designed and manufactured by Advanced Couplings Ltd, which includes the ‘Omega’ internal profile geometry known for its exceptional clamping efficiency. The SH style Safety Clamp’s unique feature is the lower portion of the bolt is wider than the opening in the clamp’s gate. In use, the wing nut must be deliberately loosened so the clamp gate can be lifted above the wider part of the bolt before the clamp can be completely opened.

“While a maintenance worker was walking through a biotech production area, his pants leg brushed the joint clamp on a steam line. The clamp’s wing nut, which had backed-off just two turns due to temperature cycling and vibration, pulled the swing bolt through the clamp which resulted in total joint failure. The sudden release of high-pressure steam severely injured the worker and disrupted production for hours.”

This scenario not only could happen, but continues to happen, and frequently enough that the need for an improved, failure-resistant clamp became obvious within the industry. That need has been met by Advanced Couplings Ltd. The CE compliant design makes it impossible for the swing bolt to release unless the wing nut is significantly loosened, as many as ten turns rather than as few as 1-1/2 turns in the conventional design.

While protection from high-temperature/ high-pressure steam line joint failure was the primary application for these clamps, they also provide protection in systems employing various chemical components, reagents and biological materials. In these applications they not only respond to the need for improved plant safety, they help prevent contamination of the production area and adjacent equipment, and eliminate product loss. Also, they may be seen as a positive factor by your liability insurance carrier.

The patented safety clamp design has been in use for over a decade. It has proven to be indispensable for the safety conscious engineers and managers all over the globe. The design enables the leak- before-burst scenario that is at the heart of ASME BPVC codes and standards. 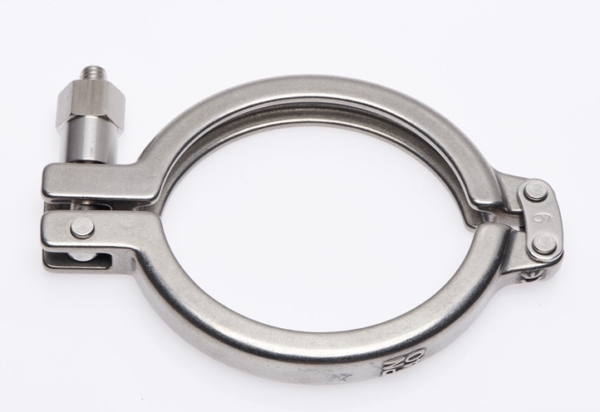 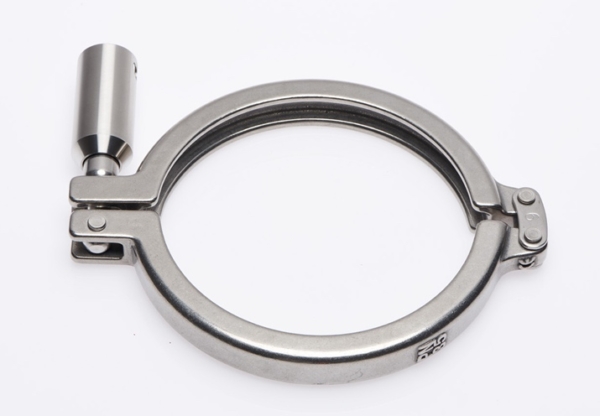 The Safety Hex Nut Clamp is based around the design principal of the standard SH safety clamp. This new variation benefits from the added safety feature of a hex nut replacing the wing nut. Using the hex nut guarantees that the clamp cannot be loosened by hand.

Shrouded Safety Clamp – SAFS
The Shrouded Safety Clamp is based around the design principal of the standard SH safety clamp. This new variation benefits from the added safety feature of a hex nut replacing the wing nut. Using the hex nut guarantees that the clamp cannot be loosened by hand. This, coupled with the added security of the free rotating nut shroud, determines that the clamp can
only be released using the correct socket adapter, alleviating problems where the piping line can easily be tampered with
or accidentally released.

Lock-out Safety Clamp – SAFL
The Lock-out Safety Clamp is an advanced version of the Shrouded Safety Clamp. The wing-nut has again been replaced with a shrouded hex nut. The shroud, however, is extended in length and modified to accept a number-coded or key-operated padlock. Once the clamp has been assembled, the padlock’s shackle can be passed through the holes in the nut shroud, stopping the hexagon head of the nut from being accessed.

Continuous improvement
ACL prides itself as being the benchmark within the hygienic industry for sanitary clamps. In order to stay ahead of the curve, the designs and standards the clamps are produced to, are under constant review.